It's time for this month's music list, and this month we're showing off our ten most embarrassing albums ever bought. hey, if blogging isn't about voluntary self-embarrassment, then what is it about? H'm?

Actually, the fact that he has a range of a total of three notes does get grating after a while.

9. Alanis Morrisette -- whatever that stupid debut album was.

I kind of liked the first single the first hundred times I heard it. Now, I'd like to punch her in the face.

The first album I ever bought. I still know every word. I was semi-famous in college for my lip-synching of Paradise by the Dashboard Light.

I'm not even sure I'm the one who bought this one, but I know I'm responsible for it being in our house, and not my husband. A friend of mine really liked the arson song, so I used to play it for him at parties.

Nope, they could not follow up on the beauty of Deeper Shade of Soul. I should have known.

4. Everything But the Girl -- Tempermental

I used to love this band, but nobody told me when they switched from meloncholy rainy-day music to seriously annoying techno. I still like Tracey Thorn's work with Tricky, though, and Massive Attack.

3. Soundtrack to Back to the Future

I was fourteen. I was crushed out on Michael J. Fox. I didn't mind Huey Lewis much. Sue me.

I'm not heavily embarrassed by this one, but it is invariably the one that visitors notice on the shelf, and it's so different from everything else in the collection that it always causes much mirth. And I get annoyed and change the subject.

1. Dave Matthews band -- that first album that made it big.

I really dug this cd for about a month one summer while I was in grad school, until all the undergrads came back in the fall and I noticed that only the most knuckleheaded of them liked DMB. Live and learn.

That's my list -- not terribly exciting I know, but that's more a reflection of the fact that I rarely buy music. My husband is a DJ -- and has vastly better taste in music than I -- so I sort of lean heavily on his collection for my cool quotient.

Oh, and here are those links to the other folks who have posted this list: 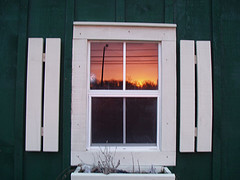